AND HOW IT WORKS Many people with mental health conditions, such as depression, anxiety, obsessive-compulsive disorder (OCD), or post-traumatic stress disorder (PTSD) don't respond well to medications. In fact, many people don't want to take psychiatric medications at all because of their long-term side effects.

Unlike psychiatric medications, TMS therapy is a more holistic and effective approach to treating such illnesses, and offers long-term relief from the debilitating symptoms of depression, anxiety, and other mental health conditions. TMS is covered by insurance for specific FDA-approved conditions.

CALL US  or fill out our  FREE TMS screening form

During TMS session, an electromagnetic coil is held against the forehead near an area of the brain that is thought to be involved in mood regulation. Then, short electromagnetic pulses are administered through the coil. The magnetic pulses easily pass through the skull, and causes small electrical currents that stimulate nerve cells in the targeted brain region. It's thought to activate regions of the brain that have decreased activity in depression.

Because this type of pulse generally does not reach further than two inches into the brain, scientists can select which parts of the brain will be affected and which will not be. The magnetic field generated by TMS is comparable to that of a standard magnetic resonance imaging (MRI) device.

Virtually free of side effects

TMS is well-tolerated and associated with few side-effects. Side effects are generally mild to moderate and improve shortly after an individual session and decrease over time with additional sessions. The most common side effect, which is reported with TMS, is headaches. Tingling, spasms or twitching of facial muscle or brief lightheadedness may result. Sometimes a person may have discomfort at the site on the head where the magnet is placed. The most serious risk of TMS is seizures. However, the risk of a seizure is exceedingly low. While TMS is a safe procedure, it is important to point out that because it is a new treatment, there may be unforeseeable risks that are not currently recognized and long-term side effects are unknown.

TMS has NOT been associated with many of the side-effects caused by antidepressant medications, such as gastrointestinal upset, weight gain, dry mouth, or sedation.

FDA cleared since 2008 for the treatment of depression

TMS treatment is effective, safe, and requires no medication

No significant side effects

Covered by most insurance plans 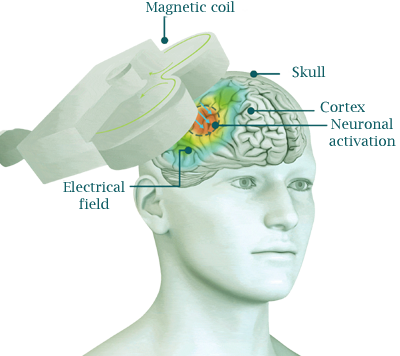 Can you benefit from TMS?